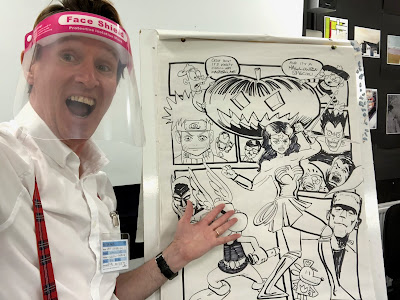 This week saw my first appearance in an actual classroom since March, when Backwell school had me in to present the first of a series of after school classes. Just one hour sessions, with "bubbled" groups of 12 kids apiece, yr 7 on Wednesday and yr 8 on Thursday. And it was brilliant. The biggest difference between a live class and a Zoom class is the laughter. Hearing a dozen kids laugh in the places where they're supposed to is fantastic. And of course you can "feel" them laugh, you sort of see them moving out of the corner of your eye while working on the flipchart, and even the quietest titter is audible, none of which is the case with Zoom.

Of course, after these two days of classes (the second of which took place as the new supposed 'lockdown' started), it was decided by the school that we have to move to virtual classes. And they don't use Zoom, so next week I will be learning the vagaries of Microsoft Teams. I have one 'actual' invite still outstanding, to a school in Coventry. We have a week and a bit to see if that happens. Meanwhile next week sees 4 days (or part days) of virtual classes. It's good to be working. 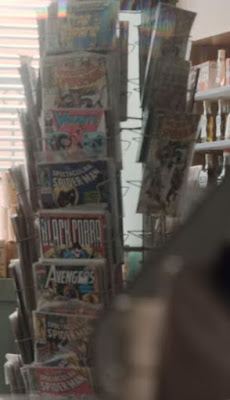 We're loving The Queen's Gambit (only up to ep 3, no spoilers). And top marks to David Leach who managed to spot and screen-grab this magazine rack from episode 2.

(Having been alerted to this in advance I could hardly see it in the episode itself, by the way). But, given how much praise is being lavished on TQG for getting its Chess so right, somebody really screwed up on getting these 1963 period comics wrong.

How can an art director manage to dress a set with anachronistic items - every one of which literally has THE DATE ON THE FRONT!

Who can explain this then? I'm trying to promote my graphic novels on Amazon. Two are approved no problem. But when it comes to Findlay Macbeth, I get:

"Your ad titled "Findlay Macbeth" no longer complies with our current Creative Acceptance Policies. Specifically for the following reasons: Your ad contains content that is prohibited from advertising. Please ensure your ad does not contain any excessive violence or gore."

Can anyone spot the problem? And anyone had this problem before?

Gore? In Macbeth? The very thought! 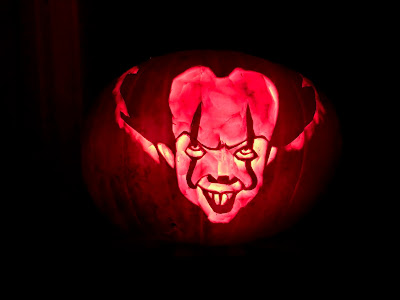 This year's pumpkin, a Pennyworth for your thoughts. Mwah ha ha haaaaa.
Here's a fun fact for comic fans. Kanye West has received more votes this year than Howard The Duck received in the 1976 US Election. At a rough guess, about twice as many.

Sad to lose the brilliant John Sessions, at just 67 years old. He gave us the phrase "waving my intellectual underpants" (in an NME interview, circa 1981) which I still use to this day.

The other quote I remember is from Whose Line Is It Anyway. In the round entitled Worst Person To Share A Lift With, Paul Merton said "hello, I'm John Sessions." I bet that doesn't make the obits.

Oct 27: Great Comics Zoom chat tonight with Hannah Berry et al on Zoom. Just went to get a cup of tea and found it had ended, so no post match chat. But it was good while it lasted. 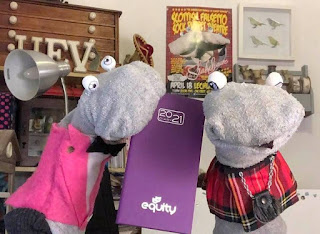 Happiness is getting your new @EquityUK diary.
Hope it ends up with more in it than this year’s!
Posted by Scottish Falsetto Sock Puppet Theatre (and Kev F the comic artist) at 08:57