Thought Bubble and other virtual events 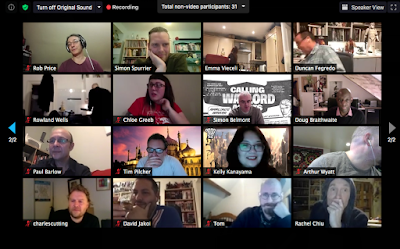 Selfies ain't what they used to be are they? A screen grab is the new selfie, when it comes to Zoom events, and I'm not even in this one I notice. This, however, was the highly enjoyable Thought Bubble Happy Hour bar, hosted as part of the comic festival we all should have been at in Leeds this weekend. I could only really join in for half an hour, plus an hour of listening in while Hev & I watched Strictly, but it was great to see familiar faces from my days back in the Bristol comic festival days, and even earlier at the old UKCAC. I could get used to going back to proper comic events, which was of course this year's original plan.

This session had been preceded over the last few week by Zoom events connected to the Lakes comic festival. They're good. They're not the real thing, but they are good.

This was another Zoom event I attended this week, where Chelsea Hart talked us all through Tik Tok and how to become a success on it. I'm not sure it'll be for me, it seems more suited to younger folk, but the session was a great inspiration. When Chelsea's connection fell out, the rest of us stayed on and had a fun conflab, just about comedy and technology and such. Apropos of nothing, it was akin to the nonsequital conversations you'll have in the Loft Bar at Edinburgh, and just as much fun. Albeit in the middle of the afternoon instead of the middle of the night.
Then I did two classes with kids, on Microsoft Teams. Don't get me started, Teams is not as good as Zoom.
Posted by Scottish Falsetto Sock Puppet Theatre (and Kev F the comic artist) at 17:57