A week in Amman 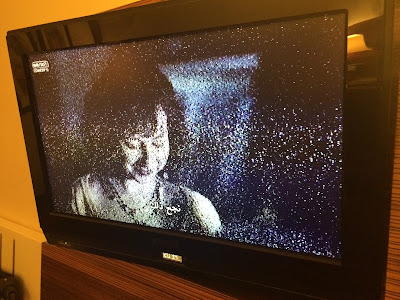 I don't know if everyone in Amman gets the ropey TV picture that my hotel room had, but I can attest that it's possible to enjoy TV shows even if they look like this. As ever the TV was really only on in the background, though I manage in the course of four nights to have seen the Jimmy Kimmel show twice, a thing called Last People On Earth with Kristen Schaal, Sex & Drugs & Rock & Roll with Denis Leary, bits of The Avengers and the Hulk, and lots & lots of going round the dial seeing glimpses of mostly news programmes but also some awkward looking soap operas in, I assume, Arabic. Though one show was dubbed from one possibly-Arabic language to another, so I'm guessing different countries have different languages, obviously, and I am ignorant. There was TV from every middle east country apart from, as far as I could see, Israel. I managed to finish artworking and to send to print my Comic Art Masterclass calendar from my hotel room (order it now). 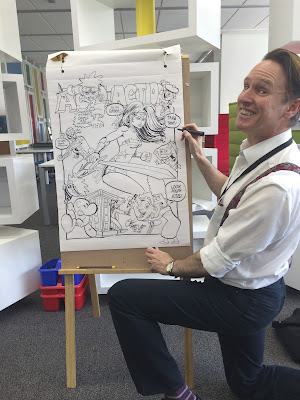 Of course my week in Amman wasn't all about studying TV pictures, it was about teaching kids how to make comics and, as you can see, I did it with my usual aplomb. Yes, it is quite a low flipchart, so I spent a fair bit of the week on my knees. The kids were great and, as I explained when I gave a rundown of the comics they made, work in Grades, this being an American School. I did classes with 6 groups of Grade 6, 7 & 8, and gave half hour talks to Grades 3, 4 & 5, all in their lovely well appointed library which had a massive collection of graphic novels.

One book Jessica the librarian gave me to read overnight, and I did, was Ellen Forney's excellent graphic novel Marbles: Mania, Depression, Michelangelo, and Me about her life with bipolar, and very good it is too. Jess is pushing for that book to be available to the older teenagers. It was the only book I read this week. Having brought an Ian Rankin and Robert McKee's Story with me, thinking I'd read a lot on a 5 hour flight, I ended up watching TV and movies all the way there and back. From Heathrow to Amman I watched Ant Man, Fawlty Towers The Builders, a bit of Avengers Ultron but fell asleep, and from Heathrow to Amman the journey was almost exactly the length of Twelfth Night from The Globe (with Mark Rylance & Stephen Fry, and jolly good it was too, though I did take the opportunity to make notes about how I'd direct it and my dream casting to make it much funnier throughout, some parts of it seeming to let the comedy slide, favouring a more dramatic and even corny style of performance), Mad Max Fury Road (an excellent bit of film making that would have been good to see on a bigger screen than the one in the back of an aeroplane headrest), and an episode of W1A. Yes, it was a 6 hour journey home thanks to headwinds which I'm sure I heard the pilot say were 150 mph, but I may have misheard. 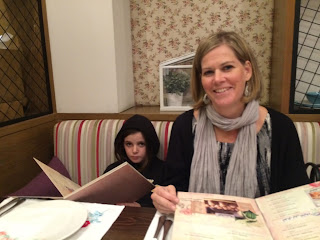 Jessica Levitt and her family, looked after me marvellously all week. They took me out to eat on Wednesday night (above you see us in a Lebanese Restaurant called Leilas, daughter Hayley is the one on the left), introduced me to the novelty of driving in Amman, where there are no road markings and, it would seem, no rules for either drivers or pedestrians. This amusing video they showed me gives you some idea.

Some of the graphic novels in the library, of which they'd taken a massive delivery, were in the process of deliberation as to whether they should go out on the shelves. Some parents being very conservative, they were wondering whether to put out Fables, Swamp Thing and Sandman, which I would have thought very acceptable, but when you look at some of the imagery and some of the language you realise might not be.

Then on Thursday night we all walked to a party in a teacher's apartment, the route of which ended up taking us half an hour because maps in Jordan are not as reliable as they might be. En route daughter Sarah and a friend recorded this video for Heather, whose birthday I was missing.


In advance of this trip, about which we were very trepidatious, Heather and I were looking at the Government websites advising travellers from the UK to only go to Jordan if essential, and warning about terrorism and the like. Well, despite the fact that Syria is the next door neighbour to the north and there have been incidents in the past, and my hotel had an X ray machine and metal detector which me and my bag had to pass through every time I came in, and a security guarded big metal gate, the place felt totally safe, and not the oppressive regime I'd come to expect.

And here we see Thursday night's party at a teacher's house, and since we're drinking beer which you get at one of the many Liquor Stores, I'd say Jordan is way more liberal than a lot of fellow Muslim countries. Sadly I didn't get to see any of its historic building, or its impressive sounding museums and art galleries, because I arrived late Monday, flew out early Friday, and was working all the daytime hours, but getting to chat to various International School teachers gave me a good insight to the country and peoples lives here. Did you know the tap water comes from tanks on the roof that you get refilled by water from the Nestle company? That Jordan has its own micro-brewery, whose beer we were drinking? Okay, that might be all of interest I really learned. 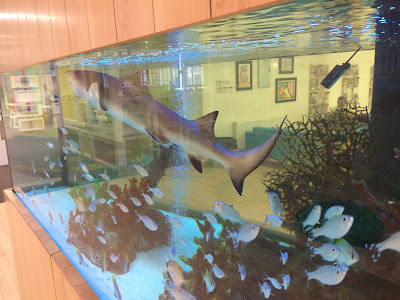 The school fish tank has a shark in, and a Jordanian Dinar is worth about a quid. What more can I tell you? My week in Amman was organised by Authors Abroad who, a few weeks back, sent me to Switzerland. I am immensely grateful for a genuinely enjoyable experience, so many thanks again. Next week, a school near Bolton.

Kev F Sutherland, as well as writing and drawing for The Beano, Marvel, Doctor Who et al, runs Comic Art Masterclasses in schools, libraries and art centres - email for details, and follow him on Facebook and Twitter. View the promo video here.
Posted by Scottish Falsetto Sock Puppet Theatre (and Kev F the comic artist) at 08:51