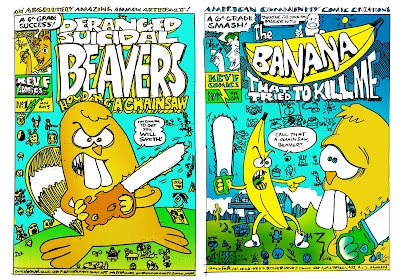 This week I have had the pleasure of teaching my Comic Art Masterclasses in Amman, Jordan, and it's been a marvellous week. Across three days at the American Community School I taught six masterclasses and gave three talks to the younger pupils, while being wonderfully looked after by the school and particularly by their excellent librarian Jessica Levitt, and her lovely family.

Having not known what to expect from Jordan, fearing the worst of a country which, I was aware after a bit of Googling, borders Syria, Egypt and Israel, it turns out to be very western and not in the slightest bit scary. As for the kids, they were a mix of nationalities, and all English (well American) speaking, and as you can see came up with the kind of ideas kids come up with all round the world. 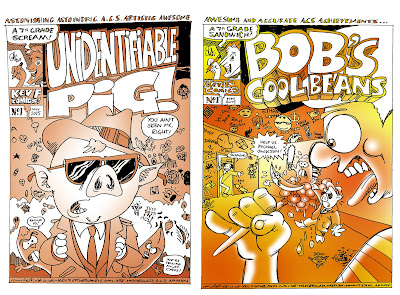 The top pair of comics were produced by the 6th Graders while the two above were by kids from 7th Grade. 7th Grade is Year 8, unless you're in Scotland where it would be 2nd Year, or posh school where it would be the Lower Remove, or would it be the Upper Third, I honestly can't remember (I've done one posh school this year that still used that bizarre old system of upper and lower forms, but it didn't stick in the memory). As for what they'd all be in Ireland, you'd think I'd know by now. I also did lectures to the 3rd, 4th and 5th Grade, which you can work out for yourself I'm sure. 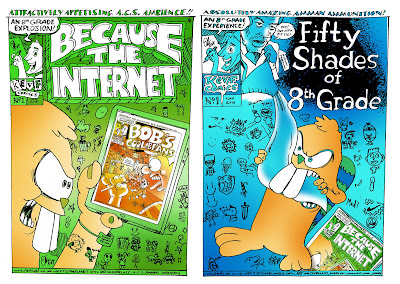 And having started the week thinking I was going to be in a strict Muslim country with harsh laws, I not only found myself at a party drinking beer which I'd not only bought at one of their many liquor stores, but which had been brewed in Jordan's own micro-brewery, but also sent the kids home with a comic called Fifty Shades Of 8th Grade, about which title their teachers batted not one eyelid.

Oh, and do you see what I've done with the sequence of covers? Amazingly, when I've worked in the same school over successive days, I've never linked the covers together like this before. 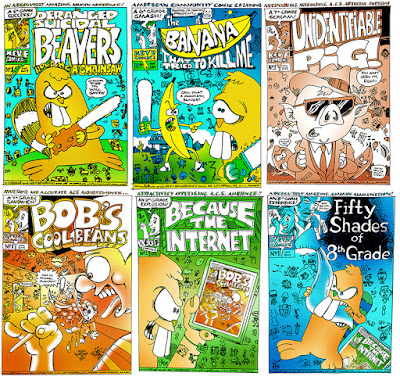 The celebs they chose to tread on a worm were, not unsurprisingly, free of Simon Cowell, who I'm delighted to report is almost unheard of in the American Community School in Amman and, I dare say, across the rest of Jordan. They chose instead Will Smith, Dwayne 'The Rock' Johnson, Miley Cyrus, Michael Jackson, Donald Trump and Morgan Freeman.