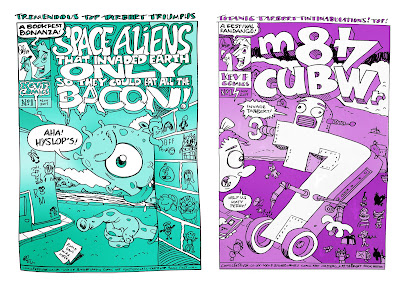 Here's a lovely grab bag of comics produced by pupils in my Comic Art Masterclasses from almost all points of the compass. Okay, not as far-travelled as last week's comics from Amman, or last month's comics from Switzerland, but still flung enough to be described as far. The ones above are from Tarbert Book Festival, on the Mull Of Kintyre, and below we have another Literature Festival, this time in Cornwall. 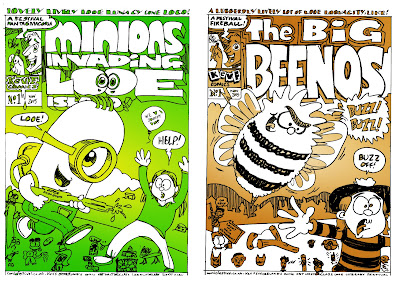 Looe to be particular, and what a lovely wee place it is, yet another of the diverse new places I've been to this year in my almost pathological desire to travel to Lit Fests nationwide. Nairn, Bradford, Manchester, Snape, Looe and Tarbert. Where is there I've not been this year? Burnley. I don't think I've been to Burnley. 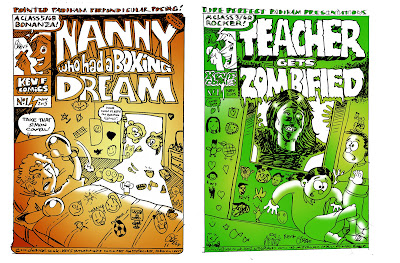 Oh no, you're right, I went to Burnley on Tuesday. Padiham to be exact. And by the way haven't we been keeping up a high standard of originality in the titles of the kids comics this month? As ever, everybody in the class comes up with an idea, then we choose the best between us. You should read the ones that hit the bin.

* Oh yes, you're probably wondering what Tarbert's m84 CUBWr means? It was one of those lovely times when a poor unfortunate pupil is a bit too young to have mastered written English (in this case I think she was 5 or 6, bless) but still has a brave stab at writing a title down on the piece of paper I give them all. In this case she was trying to write the same title as her Mum had written, Duck House. This is what Duck House looks like when you don't really know what letters are or how they work. It was the kids idea to turn the upside down 4 into a robot, so that was what I did. 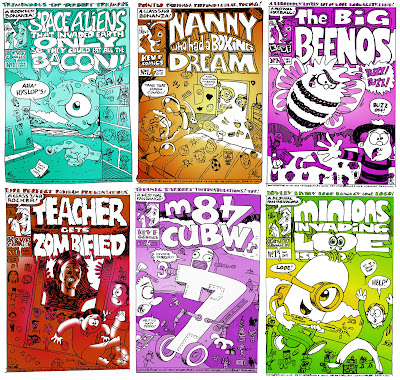