I've got off to a busy start, publishing not one, not two, not three, but four new Colouring Books! 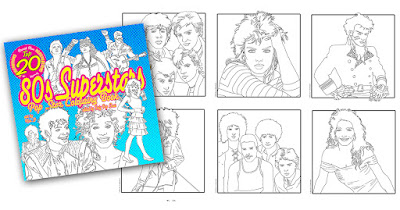 Each of these new books features a Top 20 rundown of brand new images, and I'm experimenting to see which categories will turn out to be popular. The 1980s Pop Superstars Book follows in the wake of my currently most popular 1980s Pop book
The Rom Com Colouring Book is a new direction for me, doing movies rather than music. Let's see if a) Rom Com fans are also colouring fans, and b) whether I've chosen the actual most popular Top 20 romcoms (I fear the inclusion of Gregorys Girl might be more for me than anyone else!). I'm hoping this might sell well in the run up to Valentine's Day 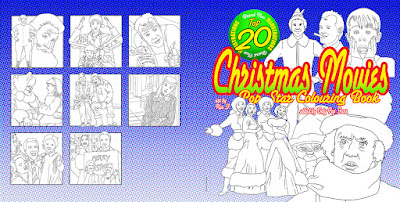 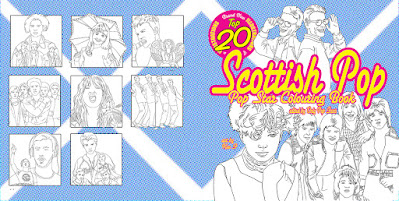 These were produced in, essentially, a day each. The 80s Superstars was done over the weekend of Jan 1-3, then Xmas Movies on Tues 4th, Rom Com on Weds 5th, and Scottish Pop on Fri 7th. Scottish Pop is the only one with short text articles to go with the pictures, the others just having a title image on the facing page. Obviously this makes the books a lot quicker to produce, as does having 20 images (as opposed to the 34 in the Punk and Eurovision books, and the 45 in the 1980s and 1970s books). We'll see, over the next few weeks, whether this turns out to be a smart judgement or a misjudgement. Do people want quantity in their colouring books? Do they want the text as much as they want the pictures? Do Rom Coms and Xmas Movies cross over with colouring?
So far it's too early to say, as none of these books has had time to register a sale yet. And my sales in the first week of January have been way lower than they were in December. Currently the score, Jan 1 to 7, is:
Eurovision - 10
80s Pop - 8
60s Pop - 2
Punk - 2
70s Pop (old) - 1
90s Pop - 1
70s Pop (new) - 0
2020s Pop - 0
So, let's see how the new books compare. The game is on.