This week's Beano features not only the debut of my Pansy Potter strips, but also a Bananaman story entitled Creepy Pasta, in which Spa-Foon and the Squa-Trontians continue their invasion attempts on the earth. Here's a tasty teaser of Wayne Thompson's stonking artwork, and the same panels as shown in my original biro-layout script. 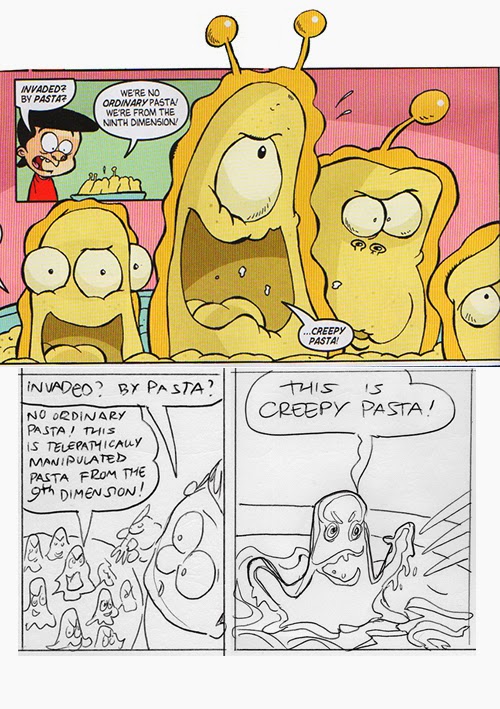 Creepy Pasta came about as a title when I stumbled upon the concept of that name. Creepy Pasta, so TV Tropes tells me, is a genre of made-up stories that people are led to believe are true. A variation on the urban myth and the fireside ghost story, they include tales of TV episodes that once existed and were banned, like the Dead Bart Simpson episode and Sponge Bob's Squidward Suicide episode. Other famous Creepy Pasta examples are the marketing campaign for The Blair Witch Project where people were led to believe it was genuine found footage, and Paul McCartney Is Dead, which I first encountered on an old tape recording in the 1970s and believed for years.

Needless to say the Bananaman episode just takes the catchy name Creepy Pasta and turns it into something much sillier (my first draft did, indeed, revolve around a banned Bananaman story, but it was becoming way too un-Beano so it changed at an early stage).

Still, it does help to answer that frequently asked question "where do you get your ideas from". With me it would appear to be, either it's satire or I nick it off TV Tropes. Sometimes both.

Buy the Beano, and see if you can spot my name hidden on the Pansy Potter strip. It is there.

UPDATE: I've just discovered I'm not the only person writing Bananaman scripts right now, so it might be a case of enjoying mine while they last. Fingers crossed, eh readers?

Kev F Sutherland runs Comic Art Masterclasses in schools, libraries and art centres - email for details, and follow him on Facebook and Twitter. He's been writing and drawing comics for 25 years, he must know something.
Posted by Scottish Falsetto Sock Puppet Theatre (and Kev F the comic artist) at 15:26