You couldn't make it up. Though, paradoxically, I am paid to do exactly that. I may have to write this story later today... 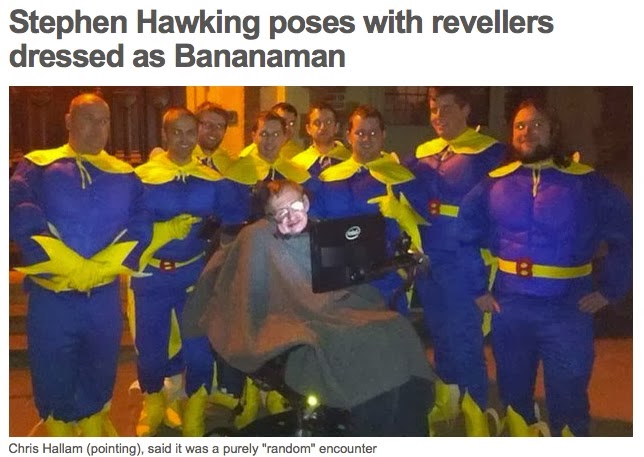 Thanks to my Mum for spotting this one in the local paper.


Nine men dressed as Bananaman grabbed a unique memento from a stag do - a photo with Prof Stephen Hawking.
The group were on a night out in Cambridge on Saturday ahead of the wedding of Chris Hallam, 29, from Lingwood in Norfolk, and his fiancee Kizzy Davis, 34.
Mr Hallam said Prof Hawking, author of A Brief History of Time, was happy to join in with the "random" photo.
"It was the cleverest man on the planet with nine men dressed as Bananaman."
Mr Hallam said Prof Hawking had a "really big smile on his face" when the group asked him if he wanted to join them for a drink, but they went their separate ways.
He said each of the group had dressed as Bananaman, a character who appeared in comics and on television in the 1980s, for "no real reason, just to stand out".
Posted by Scottish Falsetto Sock Puppet Theatre (and Kev F the comic artist) at 08:20