Constipated Kids In My Basement - more comics by kids 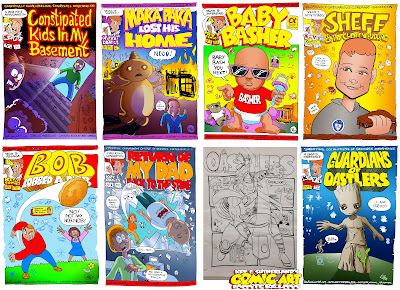 My busy season, at the end of term, when no one can figure out what the hell to do with these kids now that half the school have done their exams, or Activities Week as it's more commonly known, trundles on. These comics, blissfully, come mostly from schools within a short distance of our house. Except for the ones that don't. 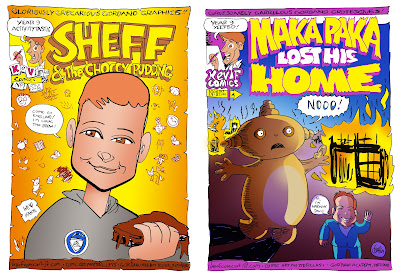 We started the week with a local school which was cheekily pushing its luck. Instead of the usual two groups, with whom I can work in a day and produce a comic, they'd lined up three groups. And they were mostly big groups too. And whaddayaknow, I did it. Two out of the three groups got their caricatures drawn, and all three went away with a comic we'd produced together. 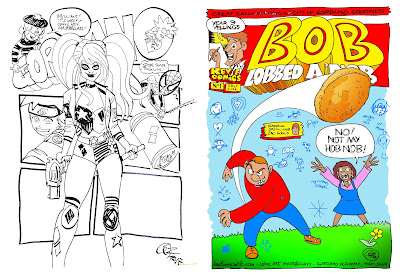 Here is that unprecedented third comic, and the flipchart I drew for them. Other schools, don't get any ideas. It's two classes a day, maximum of 30 in each group, and don't you forget it! 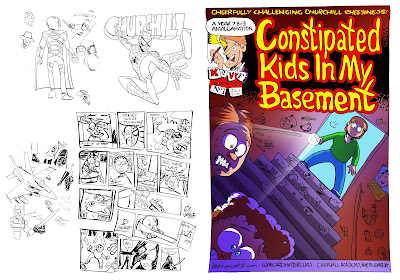 From one extreme to the other. Following the three-groups-in-a-day squeeze of Gordano School, I then had the very different challenge, presented by Churchill School, of making one group last all day. Now, as I've said, I have about two hours of brilliantly entertaining stuff I can do with kids, guaranteed to keep any group interested and busy no matter what. But spinning that out to five whole hours, that was daunting. And, guess what, once more I managed it. The extra time gave me the opportunity to spend much more time taking their actual story ideas and brainstorming them on the flipchart, as you can probably see on the back of the comics (above). That way, the usual two hour class spread out to fill four hours. Then in the final hour we played Comic Consequences, where you draw one panel then pass it to the next person to draw the next. This was so successful I was able to take those strips and print an extra supplement to add to the comic they'd made earlier. Very pleased with myself. 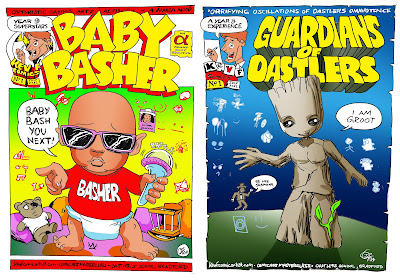 Having ended up with such a travel-light week, with Gordano and Churchill schools each being less than half an hour's journey away, we then came to a most unfortunate bit of scheduling. I had two days at Churchill, but they weren't able to do those consecutively. Meaning my itinerary ran: Tuesday Churchill, Wednesday Bradford, Thursday Churchill again. Bradford is, if you weren't aware, a four hour drive away. However the kids, at Oastlers School which deals which pupils with special educational needs, many of whom have been removed from other schools, were great, and their comics were well worth the journey. 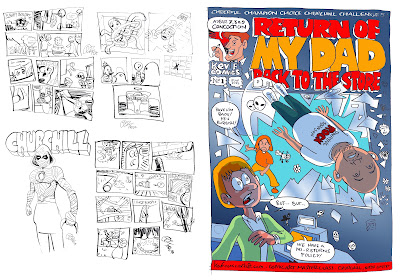 Then it was back to Churchill for another all-day class, and once more I spun my theadbare measly one-trick pony sideshow material out for a whole five hours. I must be some kind of genius.

The celebrities these 7 groups chose to appear in my demonstration strip were Freddie Mercury, Michael Jackson (twice), Warwick Davis, Kanye West, Dwayne The Rock Johnson, and Zac Gold (which turned out just to be one of the kids themselves. They had me convinced he'd been in a thing on Netflix, but I don't think he had). To that list, we'll add Tom Cruise who was suggested by the mini-masterclass group at the London Film & Comic Convention at the weekend, who didn't produce a comic.