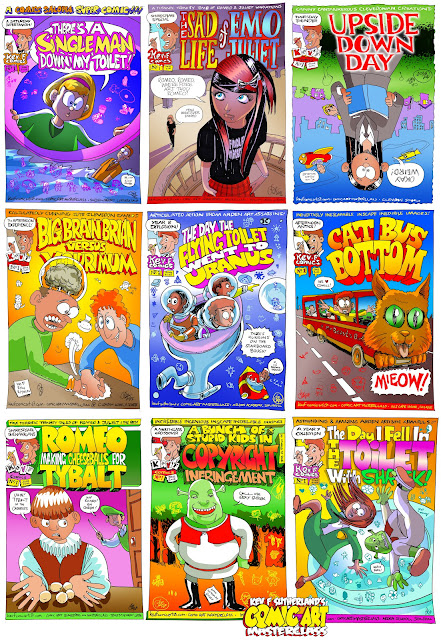 What a busy month June has been. Nine comics in a montage is a sign of me squeezing a lot of Comic Art Masterclasses in (Ooh. Apropos of nothing, I just had a deja vu as I'm typing this, in a cafe called The Chakra Lounge in Buxton in Derbyshire, inbetween yesterday's Macc Pow comics day in Macclesfield and ahead of tonight's Socks preview in Derby. The table is quite high, so my laptop keyboard is at chest height. Deja vu has passed as I've been typing) 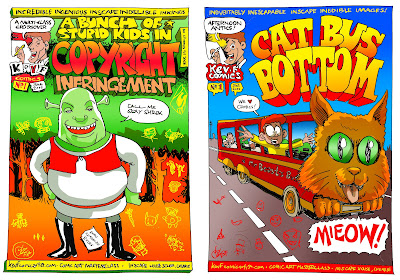 Inscape House in Cheadle teaches kids with special educational needs, so I was working with two small groups, mostly on the autistic spectrum and with ADHD or other interesting ways. I think we were all pleased with the results I got from them.
(Curiously, as I type in this same cafe in Buxton, I note that the music they're playing is the same that BT were playing when they kept me on hold for all those phone calls back in March to May while we were trying to get broadband connected. I couldn't tell you the name of any of the songs or artists, but I do know that the last 3 songs they've just played here were on that same playlist. One line hoes "Can I get an A... all I do is sit around and wait for better days". Anyone know?*) 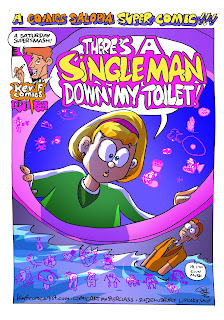 Comics Salopia in Shrewsbury was fun, for a second year running. I did a Comic Art Masterclass on the Saturday morning (waking up at 5am, not having got to bed till after midnight, following a Socks gig in Camberley on the Friday night) then went to a drinks and drawing event in the evening, and on Sunday stood behind a table of my comics all day. A quiet Sunday, I did about £55 of sales on the Zettle (plus some more in cash). 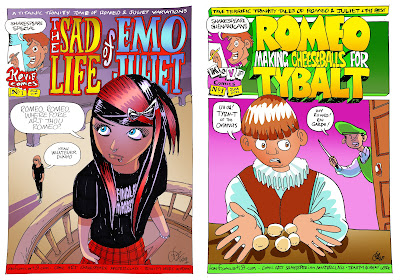 Then it was the 4 hour drive to Leeds to do, totally unconnectedly, my second day of Leeds-based Shakespeare themed comics. Last time was at Leeds Playhouse for the British Library on a Macbeth theme, this time was Trinity Academy on a Romeo and Juliet theme. 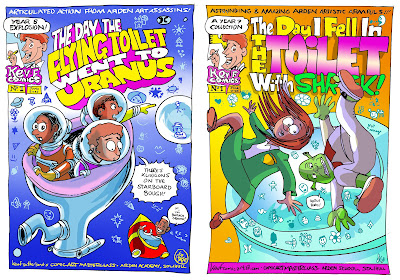 From Leeds it was off to Solihull, to Arden school, whose name had me thinking it was going to be Shakespeare again. But no, it turned out to be largely a toilet-themed day with the Year 7s. 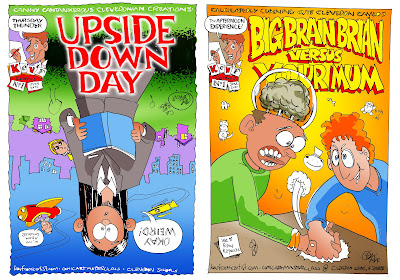 Then I had a last-minute booking, which had come by phone and I'd forgotten about. If the head hadn't mentioned it on Twitter I might have missed this booking! As it was I was caricaturing for a couple of hours at the Year 11s prom, at Clevedon school (after a day in Solihull). Then the next day I did classes with two groups of kids in Pupil Support, meaning there were some kids with a few challenges, but all of them delightful, after which I was caricaturing for a few more hours at the Year 13s prom (for the pupils who'd missed out on their original prom because it was in lockdown year).
The celebrities these groups chose to star in my demonstration strip (the Leeds Shakespeare groups didn't do this bit) were Elon Musk, Adam Sandler, Ryan Reynolds (twice), Barack Obama, Mr Beast, and Boris Johnson.
*Apparently that song is Better Days by Mae Muller and Neiked. So now I know