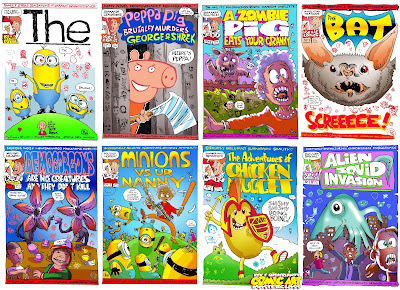 A week of classes at the art centres of Northern Ireland was a bit of scheduling that worked out quite well, though I say so myself. A little zig-zagging across the country was called for, but a lot of happy faces and splendid comic produced at the end of the process. 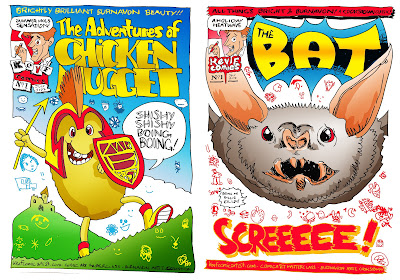 If it's Tuesday, it must be Burnavon Arts in Cookstown. Back home it was the hottest day for forty years, up here it was bearable, and two sellout classes produced these fine items. 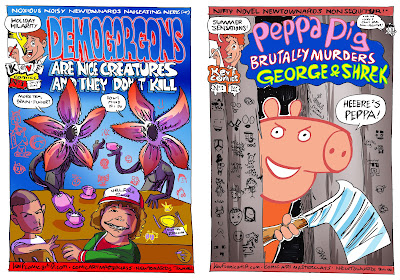 Wednesday was Ards Arts in Newtownards, where I'd last been with the Socks way back in 2016 (it remains the only place where I saw people on the street campaigning for Remain in the EU debate, and we all remember how well that panned out for Northern Ireland). The Peppa Pig cover is one that came out particularly well. The Demogorgon cover is testament to just how phenomenally popular Stranger Things is with primary school kids this season. 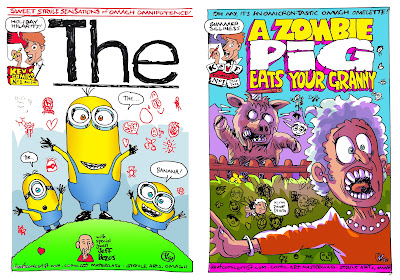 Strule Arts in Omagh, where I've played a good few times over the years (including the Socks coming here once, maybe as long ago as 2010 on a double bill with Kevin the magician) was happy to have me back. Another pair of sellout classes (we've had full houses all week so far) included the most amusingly mundane title of the week. A child gave up, uninspired, having just written "The". Which, when read out in the knockout process by which we choose the favourite suggestion, was the funniest thing they'd heard. So it won. 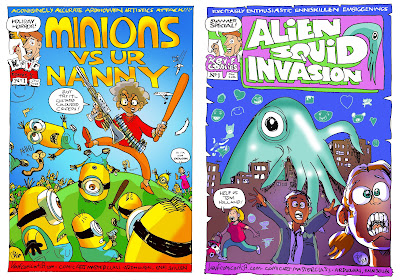 Ardhowen Arts in Enniskillen, where I'd been as recently as last year (it was my first post-pandemic flight), had the only small class of the week, with only 7 making it to the afternoon session. That said, it gave me time to draw a particularly nifty Minions cover. So, time well spent. 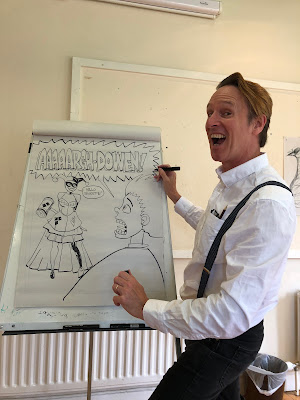