Comic Tales From The Bible - The Hardback 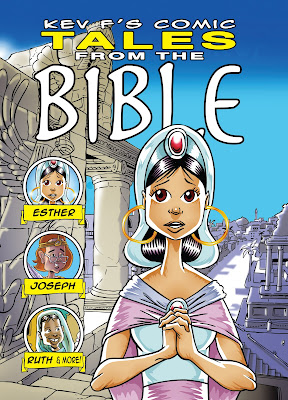 I sounded out people in the 20BooksTo50K group (which I must tell you about, it's fascinating) because my Amazon ad for Tales From The Bible had been banned.

The short of it is that I redesigned the cover for the hardback and the ad got approved. The long is that I got some interesting feedback on my original cover:

Here was the story:
Bible Banned Shock!
Amazon won’t allow the ad for Kev F’s Comic Tales From The Bible cos: “Your ad contains an image of children shown in an unsafe way, such as around drugs or in adult or other situations that may be dangerous to them”
It’s a cartoon of the story of Jael in the Bible! She’s holding a tent peg and threatening to stab a guy who looks like a Roman* soldier with it. (Am I allowed to attach images? I haven’t, in case it breaks the rules).
(*not Roman. He’s Sisera, a Canaanite)

Amazon Ads are strict. Advertise elsewhere with that cover or change it.

Yeah, your centurion looks about 12 years old, which is probably why you’re having issues.

You appealed, they still said no. Best bet now is to move on. Use other promo methods like FB ads and BB ads, or change the cover.
Yeah, definitely the image. It looks like a kid about to be attacked.
Another vote for the one being attacked looking like a jug-eared, bucktoothed child.
Your logo looks like “Tales from the Crypt” a lot. Probably that was the reason.
I'd say it's a VERY direct homage. Too direct, IMO. There's a TON of good advice here. Basically, if you want to use your largest marketing tool (and perhaps garner better sales all-around by not messing up the message), then you should change it. If you don't care about marketing, then leave it.
I'm not convinced Amazon is your biggest problem with this cover. Have you put this out for just generally input on the cover? Asked Christians how they react? If they would buy this for their child? Does this cover reflect the tone and style of the content? If yes, will this cover appeal to the gatekeeper (parent/grandparent) or even get by the gatekeeper?
Even though someone here had a "laugh" reaction, your callout here is exactly why Amazon has these strict rules: on behalf of customers who complain about this kind of stuff all the time. "This stuff" is not just related to religion, but also the stringent rules they have around violence and nudity. Folks talk about Zon being prudish but a lot of this is based on customer feedback (complaints).
Jael didn't kill a Roman with a tent peg. It was Sisera, a Canaanite king. The Roman Empire didn't even exist yet when that happened.
What's more important to you, the cover or the content? I'd just change the cover because why piss off the biggest sales tool you have?
You will not get that cover approved. If you don’t read the words, it looks almost like a horror comic. He looks like he is bound in place and she is about to torture him with a mallet and spike. I know it says ”Humorous” but the cover doesn’t present that way.
Is it a comic or a graphic novel? The cats say graphic novel and might deter your buyers.
That cover will never get approved due to the violence against a child. It's best to re-do the cover if you want to do AMS ads. And possibly even stay on Amazon, for that matter because there might be enough people that report the book due to the cover and your book might be taken down. It's always a possibility.
It definitely looks intimidating.
Change it.
I don’t know what Bible banned shock means, but it sounds hysterical.
They won't let anyone advertise a cover with someone being stabbed, any blood, a gun pointed at a person or at the reader, etc. Read the guidelines for covers. You aren't being singled out.
OK, I have a thorough knowledge of the Bible and found your sample cartoon above quite hilarious. I did a 'zon search to find it and the one bit that stood out for me as a red flag was in the descriptive blurb; 'Rahab is the story of a prostitute - target audience age 8 to 12.' I found that thoroughly confusing. I would have thought that adults with a religious background AND a sense of humour (very important) would be your ideal reader. Not sure many parents would feel comfortable ordering a book for 8 to 12 year olds that had prostitution in it. I'd consider making the online description clearer. It's a tricky one, good luck!
Amazon has strict codes on Ads with respect to covers - that tend to exclude depictions of blood, guns or weapons or too much exposed flesh. Maybe check their guidelines.
Btw, surely not a Roman soldier in a Old Testament story.
Hey Kev Sutherland from the sitcom trials!

Kev F's Comic Tales From The Bible is available as a full colour graphic novel in paperback and now in hardback
Posted by Scottish Falsetto Sock Puppet Theatre (and Kev F the comic artist) at 19:53