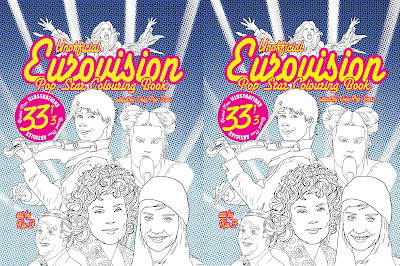 Spot the difference? There's not a lot in it*, but anyone who buys a Eurovision Colouring Book since April 15th gets the cover on the right, which has replaced the cover on the left. This follows an amend I made last month, where a mis-captioned Bucks Fizz illustration had them labelled as Brotherhood Of Man. Anyone who has that version has a rare collectors item.

The Eurovision Colouring Book is far and away my best seller at the moment. Its Tik Tok video got 12.5K views, ten times more than any other post I've done, and it's selling a signed copy every other day on Etsy at the moment. Here are my sales stats for the past month.

UPDATE: As of May 10th I've sold 43 Eurovision books on Amazon and another 4 on Etsy since May 1st. And I've drawn a 2nd Volume, which is still processing.

So, let's be honest, I'm not setting the world on fire with my publishing empire. I'm now a member of the Facebook group 20BooksTo50K, where successful writers share their stories of making tens of thousands of pounds a month, and make it sound deceptively easy. I just have to finish writing that bloody crime novel, don't I? In the meantime, the colouring books sell at a trickle, while I try and get my writing head back on, two months after the house move.

* If you're interested, on the main figure's arm, just behind Annafrid's hair, I've removed a small head and hand; and between Agnetha and Annafrid there's now a white area where previously you could see the blue background.