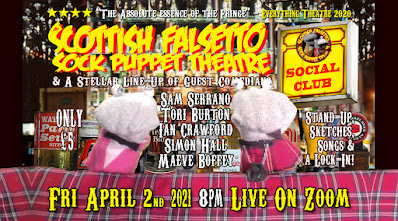 The inaugural Socks Social Club went very well and was a joy to do. Though only half the show was Socks, I ended up writing more for this than I did for their last solo show (Talking Of Changing The Subject). You can see the first Social Club in its entirety on Facebook.

No sooner had I drafted the ad above, adding the names of the actual acts (following a conversation where it was suggested all shows should do this) than two of them pulled out, on the morning of the show in fact. So it was that we ended up with no Sam Serrano or Ian Crawford, but with Jaleela Galbraith and Rebekka Turner in their place. The acts went well, Jaleelah being a perfect headliner, and Tori Burton proving invaluable as a temporary stand-in host when my broadband cut out mid-show.

The running order was:

Intro video and theme tune (I've remade the 20th Century Fox theme and Respect, cos they kept getting flagged and muted on Youtube, this version escapes that fate)

Advert 1 - Dragnet. I'd curated a set of ads, from archive.org, for cigarettes, each more shocking than the last. This one had the star of Dragnet telling you how fags weren't bad for your health.

Pouring a drink routine - this got cut off by my broadband cutting out and Tori taking over till we returned a minute or so later.

Act 2 - Maeve Boffey - was the funniest act on the very first online gig we did, Frenzy back in Feb, and did very well today

Fine Fare interview - One of my favourite bits of new material, we introduced the character Dave Clark Five and the house band. They then sang a song about a "Northern Hero", the Jim'll Fix It theme. I don't know if I'm the only person this amused, but they seemed to laugh enough for me.

Notably, tonight's show continued the pattern of singing the music live, as debuted in the last show. This means video clips are reserved for pre-filmed and novelty items, and music is fresher and more flexible.

Act 3 -  Rebekka Turner - appealed more to some than others, but I liked her, with offbeat character comedy verging on the very silly

The Bingo Round. I'd previewed this at Talking Of Changing The Subject, and with one round changed it went just as well this time.

Act 4 -  Tori Burton - does a great routine with slides, looking at her time as a pole dancer. Excellent.

Advert 3 - Flintstones. The Flintsones advertised fags in the 1960s, quite shocking.

Ventriloquism routine - a brand new routine that could, I think find its way into a live show. Must keep trying this in open spots.

Ticket sales for Social Club totalled 40 (13 on WeGotTickets, 17 on JokePit), which is about the same that the monthly shows are getting. At £5 a ticket (compared to the usual £9) I thought we might do better. This means that, once I've paid the acts, I come away with less money than I have for any of my solo shows. But it was so much fun to do, we're doing it again on April 30th. See you there. 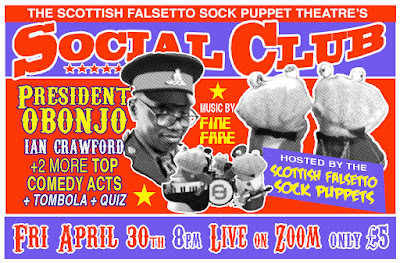