The Rabbit Who Ate France - comics by kids 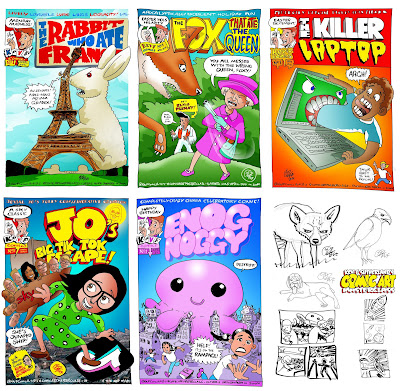 Only a few comic classes recently, but what quality productions they've resulted in. The Rabbit Who Ate France is from a sellout class run by Largs Youth Theatre; The Fox That Ate The Queen was from a class I organised myself, which attracted a respectable dozen punters; The Killer Laptop was from another sellout class, this time run by Plough Arts in Devon; Jo's Big Tik Tok Escape was from a private party to celebrate an employee, Jo, leaving Sky to go and work at Tik Tok; and Enog Noggy was from a 10th birthday party, another private booking. So no actual schools this month so far, which is a shame. I feel another mass emailing coming on.