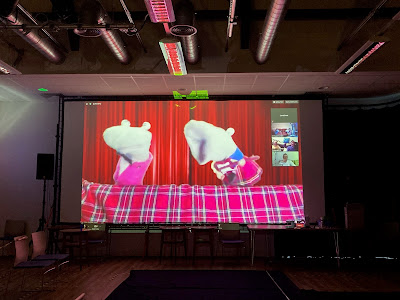 How's this for classy? Nick Steel watched last night's Socks production of Superheroes on the big screen at Widcombe Social Club where, coincidentally, we'll be making our return to the live stage in June.

As it was, our latest outing online was the poorest attended of our solo Zoom shows to date, with only 19 paying punters (supplemented with a good few guests, invited from my recent open mic shows). This was hardly surprising given that this was the first weekend when pubs were open, following the latest lockdown relaxation. And it was sunny, so the usual last minute rush for tickets didn't emerge.

The audience that did turn up for the show were lovely, and we had great laughter throughout, followed by a highly enjoyable drunken aftershow chat. 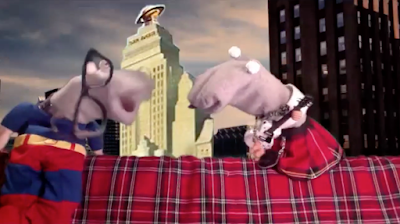 The show ran for an hour and ten minutes, even with us cutting the Cross Channel sketch near the end. Partly this was laughter and interaction causing the overun, partly it would be the advert segments that I interspersed on video (a Batgirl Equal Pay advert from 1974, a 1970s ad for superhero toys, a bizarre superhero-based advert for insurance, and a 2000s Got Milk ad, none of which I'd seen before I started searching the day before the show). And partly it would be technical issues, which included me re-starting the Avengers Reel song halfway through when Hev slipped me a note telling me the music wasn't playing. 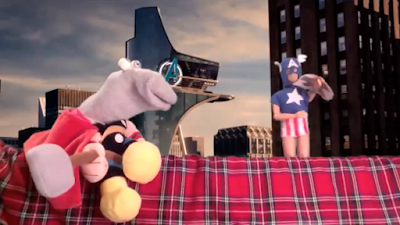 This music thing's a new problem I've found with Zoom. We only discovered two shows ago that we could play music from iTunes and sing along to it on Zoom (which we hadn't been able to a few months ago). However, when you then play a video (all of which played perfectly) it causes the music setting to re-set, which means you have to go back a step and allow the sharing of music again. It's hard because I, as a performer, am hearing the music perfectly, it's the punters who are getting silence. I imagine Zoom will fix this problem soon.

Apart from the adverts, and the abandoned Cross Channel sketch, the running order was the Superheroes show as done at Edinburgh and on tour, and most of it worked well. But god do those costume changes and music cues need some tightening up! Next time it'll be smoother. If, of course, there ever is a next time. 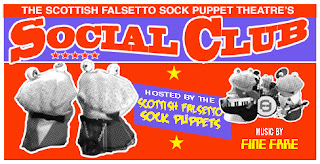