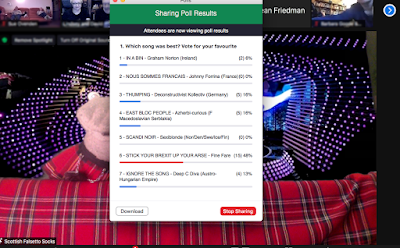 And the winner was.... the UK. Quite to my surprise, waltzing away with 48% of the vote in the Socks' Eurovision Sock Contest last night, was Fine Fare singing Stick Your Brexit Up Your Arse.

I'd rather overlooked it as a contender, as it was the only song in the show that had been written before last week (it featured in Roll Up in 2019 and had been included in live shows before that, certainly as long ago as our Denmark tour in 2018). And the punters loved it, which is great.

I must admit I was surprised by most of the voting. The song that I thought would win easily came in fourth, and my other two favourite compositions got no votes at all. The biggest delight for me, though, was that all 6 new songs were written in the past week. It was only last Saturday, in the shower, that I came up with the idea for the East Bloc and French songs. Then, in the car to the shops, I started busking ideas for the Austro-Hungarian song, which Hev took down as dictation and emailed to me later. On Monday I recorded those three songs and came up with the Ireland song, and on Wednesday wrote and recorded the Scandinavian song. As a last minute afterthought, easily the quickest to write and record, I rattled off the German entry, secure in the knowledge it would get no votes whatsoever. Here is how the show went... 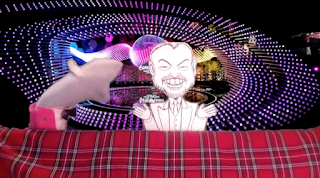 In The Bins - Graham Norton (Ireland). To the tune of It's A Sin, I thought this was a fun idea, singing about the presenters' booths at Eurovision, but didn't expect it to get votes. It came 5th. 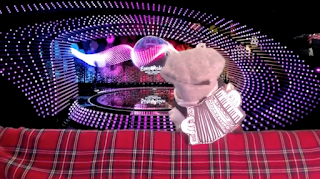 Nous Somme Francais - Johnny Forrina (France). I thought this was the funniest set of lyrics, and it did indeed get some good laughs. It attracted, however, no votes. (Had we been able to do a more sophisticated voting system, I'm sure it would have been lots of peoples' second choice). 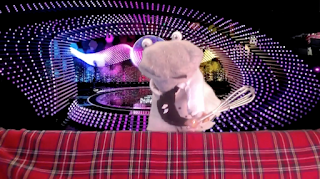 Thumping - Deconstructivist Kollectiv (Germany). I honestly thought this was a throwaway filler and would get nowt. It came joint second. Hev loved it and thought it was the closest to an actual Eurovision entry, Steve (Noble) compared it to the stuff we did at art college, and even name-checked Einstürzende Neubauten in comparison. Who'd have thunk it? 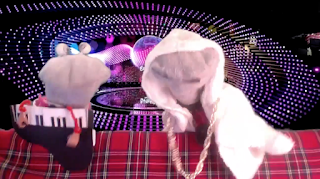 East Bloc People - Azherbi-curious (Former Macedoslavian Republic of Serblakia). Because it was written to someone else's tune (Pulp's) I thought less of it, but it was the first song I came up with in the shower and I can see why it came in joint second place. 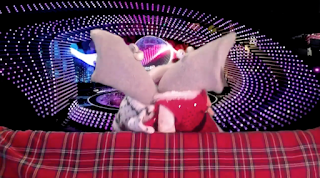 Scandi Noir - Sexiblonde (Norway/Sweden/Denmark/Finland/Iceland). I was most proud of this because it's a totally original composition (as are the German and Autro-Hungarian songs) rather than a re-wording of someone else's tune, and I thought the premise of it was very clever (that the Scandinavians will get Scandi Noir on your ass if you don't vote for them). The voters thought otherwise, nul points. 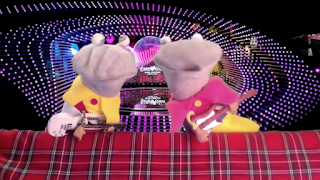 Stick Your Brexit Up Your Arse - Fine Fare (UK). The outright winner, as previously seen in our 2019 show, but not by most of the viewers of tonight's show. I guess it is a very funny number, tried and tested on stage many times, with a sentiment the audience agree with. A deserved winner, even though I'd have loved something else to get that much love. 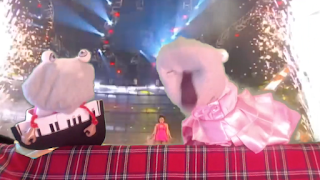 Ignore The Song - Deep C Diva (Austro-Hungarian Empire). Far and away my favourite song of the night. An all-original composition, with lyrics lampooning Eurovision stage productions, it was also the only entry to have a video production, with the Socks performing in front of clips from actual Eurovision shows. I thought this entry would walk it, and the others would trail in its wake. Shows what I know, it came in fourth. I still think it has genuine merit and beats lots of genuine Eurovision entries for quality, though I may be delusional.

Dean Friedman did two numbers, knocking everyone out with his rendition of Lydia at the end of the show, and the aftershow chat was great, with nearly 30 people staying and joining in. We eventually wound up around 10.30.

I haven't announced the next Zoom show yet, concentrating on the live shows we have lined up. Let's hope the punters are champing at the bit for our return when I do.