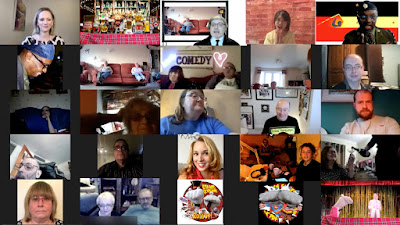 Belatedly (ie the day before Eurovision Sock Contest) I'm getting round to writing up Social Club 2. Let's see what I can remember. You can see the entire show here. It was a greatly enjoyable show, and I was disappointed by the size of the audience. With pubs having reopened, and the weather having turned sunny, it was always going to be hard to drag people indoors, and this ended up with our second-lowest paying audience. A shame, because quality wise it was an improvement on the first Social Club, and I'd love to keep these going. But, for the time being, I'm putting Social Club on hold.

Our guest comics were the best. Nerine Skinner was a fabulous opener, with the strongest 7 minutes of the night; Ian Crawford, having been postponed from last month, gave his brilliant spoons lecture, which had great interactivity including a screen grab of our actual punters, which went down marvellously; Michelle Malizaki did a cracking set from her cupboard in LA; and President Obonjo was a fab headliner, rounding the show off in style.

Once more I used this format as an excuse to write novelty and experimental material that might not fit in a full Socks show. The Tombola was a half-baked idea with cardboard cutouts of Tom Jones and Tom Hanks (which one has the Ebola? was the schtick). It was only the next day I worked out how it should have been structured. Musical Bingo made a return, with songs by the Bee Gees, Desmond Dekker, and George Ezra. It's the one item that's muted on the Youtube clip, so you'll have to guess how it worked (it went well). And The Quiz was an idea that got a bit beyond itself, based on the Two Ronnies Answering The Question Before Last. Those who got it, got it. Everyone else may have been a bit bemused.

Fine Fare did a couple of older numbers, We Can See You and The Ballad Of Cannon And Ball, which went well as most people were hearing them for the first time. We also threw in the Perfumes routine, and were also going to do Macacque but had to cut it for time. Just as last time, I think I'm not going to fill an hour and we end up with a show that runs to one hour 20.

It was followed by the most enjoyable after show drinks, which is my favourite part of the night. Only a small cadre of a dozen stayed on, not surprising given the size of the main crowd, but it was quality not quantity that counted.

I'd like to revive Social Club sometime, and maybe it'll happen in the Autumn if online gigs are still a thing. Till then, I'm glad to have done the two experimental shows. Our next Zoom show is Eurovision, after which I'll be considering whether, what, when, and if we do more. Let's see. 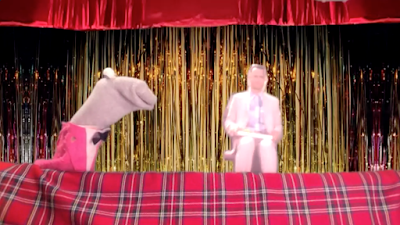