Nans galore - comics by kids, in real life and online 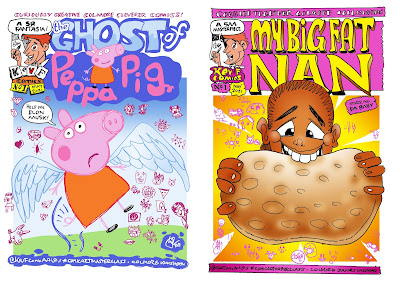 These two comics were produced by pupils at Colmore Junior School in Kings Heath, Birmingham. And eagle-eyed readers of this blog may notice something they've not seen on these comic covers for a while: little doodles by the kids themselves. Yes, for the first time in a year (apart from a one-off visit to Coventry in October last year, during the false-optimism-break) I've been back in a real school in person and it's been great. Having had to skip 2020, my annual visits to Colmore have resumed, teaching all four groups of Year 5s. They took away photocopied comics, and I found I could remember how to do everything as if I'd never been away. 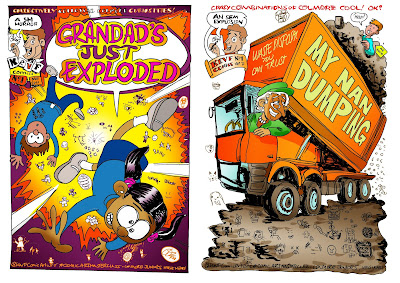 These are from day two at Colmore, where an obsession with nans and grandads seems to have set in. Note how I swerved the dumping image they were obviously going for. The little scamps. Classes were done without masks even, those only being needed in the corridors, and it all felt very back to normal. Though I did hear from a teacher in the staff room who'd suffered from quite bad Covid just this year, being hospitalised and, ironically, catching it in the week after he'd been vaccinated. So we shouldn't get too complacent just yet. 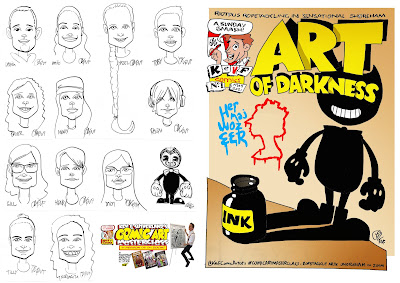 Ropetackle Arts Centre in Shoreham was a Zoom class on a Sunday afternoon. Another perfect one, with kids on separate screens, and without me having to travel to Kent, which is the sort of luxury I'm going to miss when we do get fully back to normal. 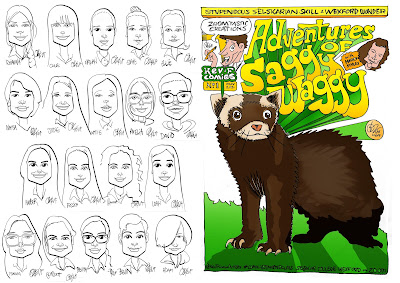 Selskar College in Wexford was the first of my two totally coincidental classes with Wexford schools in little over a week. This one had to be done on Teams, which is the most frustrating of software, but went smoothly and was great fun. 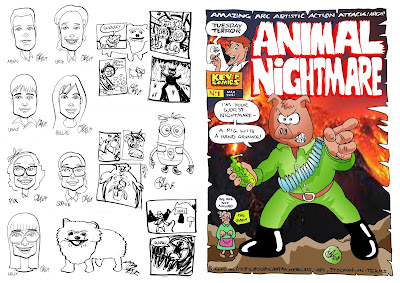 Arc Arts Centre in Stockton's class also had to be run on Teams and was much more frustrating, with me discovering more vagaries of that annoying software I hadn't encountered before. When kids are watching on a phone the Teams software zooms in on their image so as to fit a widescreen box, meaning I was seeing an ultra close up shot of peoples noses and couldn't understand why they wouldn't get further away from the screen to be drawn and to show me their work. I guess, before now, when I've been obliged to use Teams, people have been on tablets and laptops so this hasn't occurred. It is such a user-unfriendly system, Microsoft Teams is the biggest thing I won't miss about online classes. 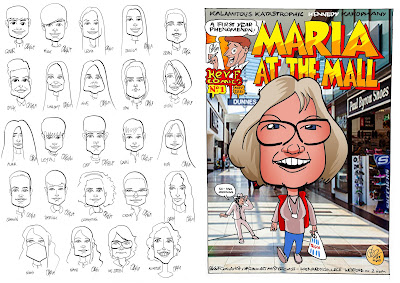 Kennedy College in Wexford rounded up a busy week, and indeed the month, of classes, in style. They have to wear masks in class still, and I came up against my first, and only to date, pupil who wasn't comfortable taking her mask off, even to be drawn. She relented later, so ended up with two versions of her caricature (you can see them on the back cover, above). Zoom on two big screens, now you ask. 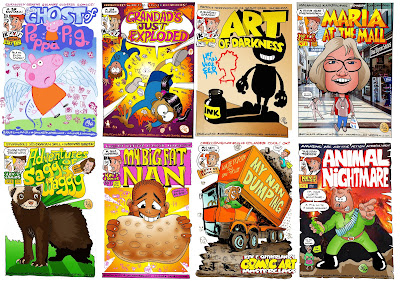 The celebrities these eight groups chose to appear in my demonstration strip were Elon Musk, Ariana Grande, The Queen (twice), Michael Jackson, Harry Styles, Da Baby (a rapper), and Mr Beast (a Youtuber).

My next Comic Art Masterclass open to the public - and my first in the flesh since March 2020 - is on Saturday June 12th at Clevedon Literary Festival. On Sale Now!