Socks do Beat The Frog & a garden party

Well, last night's journey to the Frog & Bucket was worth doing, just to get out there and experience doing gigs, but sadly The Socks couldn't grab the audience's attention.

We were 6th on the bill of competing new acts, each trying to last 5 minutes before being gonged off (by three audience members who got to hold up cards if they didn't like the act). Three acts before us had been gonged off, and two had lasted the whole 5 mins, none had been that bad or that great.

We came on after an interval, so I'd had time to erect the set and be ready sat on stage for the start of the set. Then, when he introduced us, I was doing the set without music (which would have been too complicated) so I go on cold, with my "20th Century Fox" sign and me just singing the music. Then when the first Sock says "hello" we get no reaction at all. That's never a good sign. We get nothing for "shit he's got a guitar", nothing for the quick costume change. We really were not grabbing their interest, and when that happens I'm really not sure what to do. I ploughed on with our best opening material, but when a room is thinking "what's this nonsense?" rather than "ha ha what's this nonsense?" you can really feel it's going nowhere.

Although we got good laughs from parts of the room for some funny lines, all in all they just weren't a Socks crowd, and after about 2 minutes the three cards had gone up and we were off. We got probably our biggest laughs from me then having to sidle off stage with the set, remaining unseen.

As I was packing up backstage I heard all 4 acts after me getting gonged off too, so the audience were just in that kind of mood. The plus side was I didn't have to stay to the end of the show and got back to my hotel by about 11.30.

As I type this it's Tuesday morning, and I'm looking forward to a 50 minute drive to my school near Grassington, a day of classes, and a four and a half hour drive home. It's good to be back on the road again. In contrast, just two nights earlier on Saturday the Socks played Zion Arts in Bristol for their 10th birthday party. It was a garden party, we were on at 7pm, we were following an avant garde pop act who sang in Japanese, and we absolutely stormed it. We did half an hour, opening (with proper music cues) pretty much exactly to how we opened the Frog & Bucket. Only at Zion they were amused from the start, thought we looked and sounded funny, then found everything we said funny. We interacted, we got bigger and bigger laughs as the time rolled on, and before you could believe half an hour had passed, they'd had the "TV Ariel" routine, the I'm A Sock song, Ship In A Bottle, Earth Song, The Magic Routine, and for the first time in ages Star Wars, which went so well I shall be resurrecting it for future shows (I'd done it for the previous night's 20 minute set for Wollaton Arts Festival, which also was a stormer, and which turned out to be on Zoom, I discovered the day before, having been all set to drive to Nottingham for it!).
So, for the record, the last three Socks gigs of June were a storming 20 minutes online (a paid gig by the way), a storming 30 minutes out doors (an even bigger paid gig), and a poorly received 2 minutes in a comedy club (unpaid). On balance we're actually doing rather well. 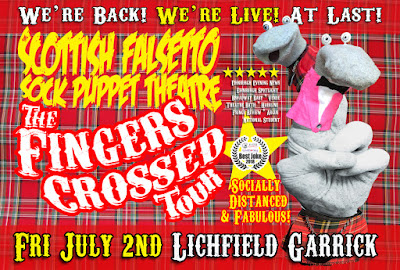