Findlay Macbeth, my debut graphic novel, and its successor The Prince Of Denmark Street are both on sale now on Amazon for just £5.99. Or, if you want a signed copy, you can order them direct from me.
Findlay Macbeth on Amazon
Prince of Denmark Street on Amazon
Signed copies - just apy £6.99 per book at paypal.me/KevFSutherland, making sure to include your address, and letting me know which book(s) you want, and a signed copy will be yours.

Libraries and schools can order copies from their usual supplier Askews and Holts. https://www.askewsandholts.com/

Findlay Macbeth is my comic strip adaptation of Shakespeare’s tragedy like you’ve never seen it before. I’ve brought my comedy storytelling approach to bear on the bard, in a comedy thriller giving the familiar take a unique spin.

Findlay Macbeth is a mild mannered unassuming salesman working for a small company in Scotland in 1977, and his wife Linda is an aspirational social climber. But a life of Ford Cortinas, shagpile carpets and fondue based dinner parties is turned on its heavily-hairsprayed head when the chance of becoming the new Managing Director passes him by, and Mr and Mrs Macbeth embark on a plan for success which turns out like no-one could have wanted.

This 125 page graphic novel is written and drawn by me, and aims to be suitable for readers of all ages - well, let’s just say, if you’re old enough to watch Macbeth you’re old enough to read this. Blending 1970s sitcom and crime dramas with the classic tale of ambition, it’s Abigail’s Party meets The Scottish Play meets Asterix, Naruto, Watchmen and The Beano and I hope you’re going to like it.

As well as the 125 page comic strip, you get the full text of Shakespeare's play illustrated by me. 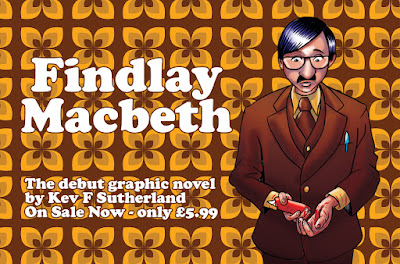 THE PRINCE OF DENMARK STREET
"Something's rotten, look at the state of Denmark Street"
In the brand new graphic novel from Kev F Sutherland (Beano, Marvel), Hamlet is relocated to 1977, on London's Tin Pan Alley at the heart of the music business. A punk rock opera with a twist, when Prince Hamlet finds what happened to his dad, there's hell to pay. 120 pages of original comic strip drama, plus the full text of Shakespeare's Hamlet in one classic volume. The follow up to his debut graphic novel Findlay Macbeth.
"A hit, a palpable hit!" 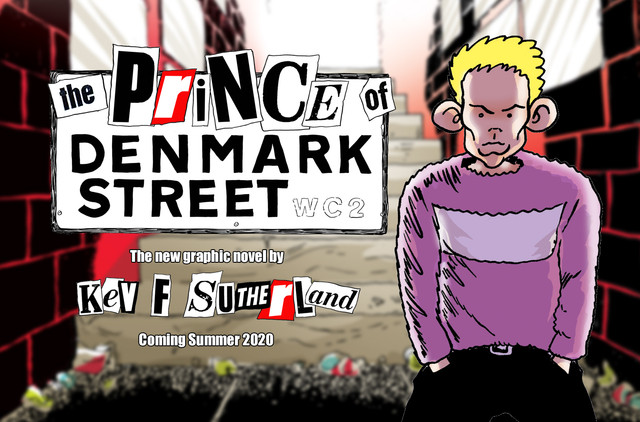