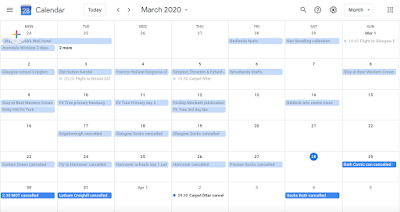 Look at that diary. It's hard to comprehend how much our lives have changed in just a few days of March 2020. At the end of February we were hearing about this coronavirus spreading in China, and cases popping up in the rest of the world, but hardly anyone was taking it that seriously. Certainly, looking at my schedule, if there was any infection already present in the country, I personally was not doing anything to contain it.

Between Feb 24th and March 14th we see me travelling (driving and flying), teaching in schools, and staying in hotels from County Wicklow in Ireland to Glasgow, to the Lake District, to Boroughbridge in North Yorkshire, Worksop in Nottinghamshire, Belgravia Central London, Andover in Hampshire, Staffordshire, Newbury in Berkshire, then my final class (for now) in Baldock in Hertfordshire. In 20 days I'd travelled to and worked in ten different counties, in three different countries, and been in contact with up to 650 school kids. And it wasn't until March 9th, waking up in my hotel room in Boroughbridge that I started thinking, should I be maybe cancelling some things?

Even then, when a first few people online mooted the idea of events like the Edinburgh Fringe in August being cancelled, they were laughed at and shot down in flames (at time of writing Edinburgh is still not cancelled). When (on the 8th or 9th) I contacted Glasgow Comedy Festival about cancelling my shows on March 18th and 19th, I was a rare case and most people were still planning on going ahead. 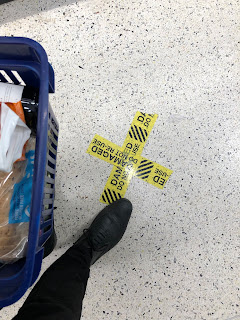 All through that week (March 10 - 12), when I was doing three days at the same school in Newbury, there was lots of talk in the staffroom about what was going to happen, but no special precautions other than encouraging extra hand-washing. By the end of the week a couple of future schools had erred on the side of caution and decided it was best not to have visitors (so my school on the 17th postponed of their own volition) but the government had made no decisions on schools closing yet. My three day trip to Hannover was an early casualty, understandably. Even then, they didn't officially cancel till Friday 13th.

As I did my class at Baldock Arts Centre on Saturday 14th, I was still in receipt of an email from the school I was to visit on Monday 23rd confirming that I was definitely still coming.

In the week of the 16th to the 21st I started working on the new book, knowing that things were going to go down, and with Socks shows and schools cancelling in growing numbers (though many at Glasgow Comedy Festival, which I'd pulled out of voluntarily, were still going ahead through that week). It wasn't until Friday 20th that the government announced the closure of schools.

The weekend of March 21/22 was The Phoney War of the lockdown. Though we'd all been told to stay at home and go out as little as possible, Clevedon was one of the seaside towns that looked like it was a Bank Holiday. There were more people on the seafront than usual, with a large cluster of cyclists, and cafes still serving out on their forecourts, even though they weren't allowed to let people inside. We went for our last walk of any distance, and the last visit to the storage unit for a while, then on Monday night Boris Johnson gave his Big Brother/Churchill broadcast about the lockdown, since when it's been serious stay at home time. 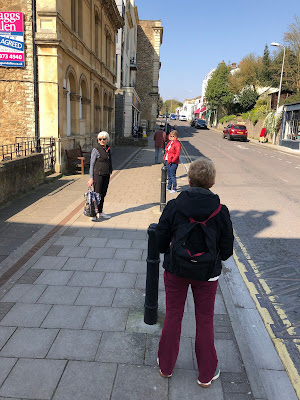 The odd sight of 'social distancing', ie keeping at least 6 feet apart, as we queue to get into Sainsburys on Friday 27th.

This is such a change to everyone's lives in such a short period of time it really is hard to get your head around. If I imagine that same period happening during an Edinburgh Fringe month, say. I'd have been arriving in town on Mon March 2nd, ready to do my first show on Weds 4th, the first proper week of shows would start on Saturday 7th, and you'd be looking forward to a sellout weekend for the 14th, then the busy second week would begin on Monday 16th, the quiet third week on Monday 23rd, and you'd be feeling a bit sad about it all being over on Sunday 29th. Edinburgh whizzes by in that period of time and, though it can be unpredictable how it's going to pan out, how can you conceive of the world changing entirely in that same short period of time?

Sorry for rambling, I really am trying to get my head around the situation. Because if things can change so much in these few weeks, how much more can it change in the weeks and months to come?

Onwards and upwards, stay happy everyone.