The New Book - work in progress

Because coronavirus, I'm writing the second book. Here's a diary of my progress, to keep track of my activity.

Sat March 14th - My final art class before the lockdown, in Baldock. Online I think out loud about writing a new book, but I'm not sure what to write. I start doodling ideas.

Friday March 20th - I've biro-scribbled 13 pages of an adaptation of Hamlet, which has the working title Prince Of Denmark Street. Ideas rejected along the way include The Merchant Of Venice with an Indian Shylock and a corporate King Lear.

Tuesday March 24th - I now have 31 pages of scribble and am coming up to Act 5 already, in what is a very rough first draft with a lot of rewriting ahead. 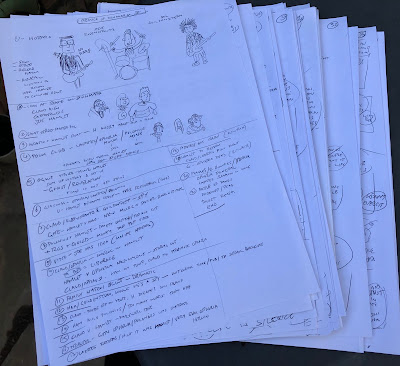 We're very much in 1977 again, and as I go along we seem to be developing a punk musical. Quite whether this means I have to write and record actual music to go with this thing I don't know. The big thing that is sticking out a mile, comparing Macbeth to Hamlet, is that Shakespeare's Hamlet has way too many words!

Whereas Macbeth has a really taut, action-packed plot that drives on from pivotal scene to pivotal scene, full of visuals, dramatic incidents, and well placed monologues and dialogues, Hamlet is all bloody gab gab gab. To my eye, giving the play a thorough reading possibly for the first time, it seems like the full text of the play comprises different versions of the script, collected together like a Directors Cut. No wonder performing the whole thing would take 4 hours, I don't think it was intended to be that long.

It's no coincidence that the two versions that I've watched this week - Peter Brook's 2000 version starring Adrian Lester, and Laurence Olivier's 1948 film - both present heavily edited versions of the text. Both change the order of key scenes as, I learn, do many performances. And there's no denying the quotable stretches of script contain brilliant brilliant poetry, which one keeps wanting to keep in, it's also impossible to avoid that it's out of proportion to the action.

The excessive verbiage also makes the motivation of characters unclear, suggesting that different swathes of script come from different drafts performed at different times. As I go through it, with my adaptation shifting the action to punk-era London and the music business of Denmark Street, I'm realising I have to do more picking and choosing, and will be going back and doing a hell of a lot of rewriting. Rosencrantz and Guildenstern play a bigger part in my story than in some places (Laurence Olivier eliminated them entirely), not overly influenced by Tom Stoppard's R&C Are Dead, which I've also watched this week. I'm finding Guildenstern's role in the Shakespeare text much more worthy of development.

I've written a couple of bits I'm well pleased with, and am lumbered with lots that I find plain boring, because I find those bits of the play boring. But I'm getting my teeth into it and I can see myself getting somewhere.

Working under lockdown is harder than writing Findlay Macbeth was back in December. It's hard to keep away from the constantly updating news on Facebook, Twitter and the paper, and it's undeniably weird being in this situation where everyone has to stay indoors. But onwards and upwards, let us see if these pages of scribble turn into something anyone wants to actually read.

UPDATE: Weds March 25th - page 38 of scribble and I've completed the first draft of the whole thing. Spending the afternoon going over it all again. Two scenes already rewritten. From the blueish light in these snaps you can probably detect that a lot of writing has been done out in the back yard, it having been sunny enough to do so for a couple of hours every day. 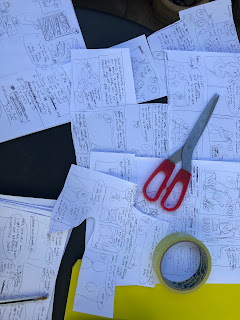 Thursday and Friday were the scissors and sellotape stage. That's how I roll. Roll of sellotape.

UPDATE: Fri March 27th - Bish bash bosh, brilliant! Got the script edit and rough panel breakdown finished by 5.30pm, before Friday Night Dinner (new series starts tonight). This script breaks down to 593 panels (compared to Findlay Macbeth's 475 panels, see I told you it had too many words!). Next week it will be time to start laying out some pages.

UPDATE: Sunday March 29th - Page breakdown laid out. Turns out I'd made a cock up on the panel numbering and it's nearer 490 panels, which breaks down into just 114 pages. Actually shorter than Findlay Macbeth's 125 pages. Hoorah. Now I'm ready to start putting words in voice bubbles.

Back in December I noted that 120 pages of script (to the stage I am now) had taken me 9 days. For Denmark Street the same process has taken me 14 days, though there has been a lot more shilly-shallying and distraction. Let's see how my work rate compares to FM's record-breaking production speed.

Continued in Work In Progress (part 2)