In response to the whole lockdown scenario, I've put an entire Scottish Falsetto Socks show online. SUPERHEROES, the award-winning 2018 show, is on Youtube as a complete item. Here it is.

Enjoy such classics as Dead Ringer For Superman, the Bechdel Test song, Batman vs The Joker, The Avengers Reel and many many more.

If you'd prefer to watch a selection of individual sketches and songs as stand-alone items, they're all on this Socks Superheroes playlist, which also includes unused material that appeared in previews and didn't make the final show, plus videos of all the songs used in the pre-show music. An extra hour's worth of material is out there to be found.

And that's just for Superheroes, the 2018 show. If there's any interest in this upload, I may be able to do the same for other shows (depending on what video material survives). What would anyone like to see next? 2015's Minging Detectives? 2016's Shakespeare? 2019's Roll Up? Let's see what we can fid in the archives. 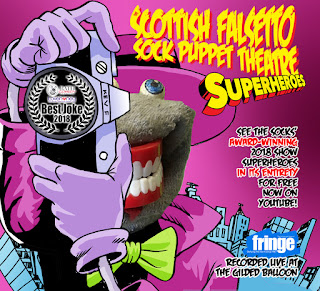